About the Silverstone Project

Project Silverstone is expected to reduce emissions by 150,000 tonnes over the project lifetime.

This project alone will deliver 10% of Iceland's Climate Action Plan calls for by 2030 within the energy and industrial sectors not covered by the EU ETS.

Carbfix and ON Power, subsidiaries of Reykjavík Energy, have received a grant of 3.9 million euros from the EU Innovation Fund for the Silverstone project. The project will scale up, design, and build an optimised Carbfix capture plant with the capacity to capture about 34,000 tonnes of CO2 annually, which would otherwise be emitted to the atmosphere. The new capture plant will be commissioned in 2025.

The Carbfix technology was first developed at ON Power’s Hellisheiði site, in collaboration with industry and academia since 2007. The technology imitates and accelerates natural processes by rapidly turning CO 2 into solid carbonate minerals underground. It is proven at the project site to be safe, efficient, and environmentally friendly. By injecting CO 2 dissolved in water into basaltic formations, it is rapidly transformed to minerals for permanent mineral storage.

What is Project Silverstone?

How does the Silverstone project work and how does it affect the bedrock?

The Carbfix technology imitates and accelerates natural processes, in which CO2 is dissolved in water and interacts with reactive rock formations to form stable minerals providing a permanent and safe carbon sink.

Young and fresh basaltic rocks are fractured and porous, but over time the pores are filled by secondary minerals. The Carbfix technology accelerates this process and utilises part of the pore space as storage space for CO2 in the form of the stable carbonate minerals, such as calcite, which is a common mineral in Icelandic bedrock.

The storage capacity for CO2 in young basaltic rocks is immense, with the possibility of storing over 100 kg of CO2 per 1 m3 of rock. Furthermore, it has been estimated that the injection of approximately 10,000 tonnes of CO2 per year has been carried out at the Hellisheiði site since 2014 uses less than 0.01% of the storage capacity of the reservoir.

When will the project start?

How much CO2 will be injected?

What does Silverstone mean for Iceland's Climate Action Plans?

Emission reduction. The project has considerable scale up potential, providing a significant impact for emission reduction within the geothermal sector. This project alone will deliver 10% of the 55% emission reductions that Iceland's Climate Action Plan calls for by 2030 within the energy and industrial sectors not covered by the EU ETS. In addition, the technology is readily adaptable to several hard-to-abate sectors, including steel and iron, cement, ammonia, and waste management.

How is mineralization measured?

The mineralization of the injected gases is observed using tracers and by following geochemical signals, both of which are monitored by the sampling of fluids from wells in the vicinity of the injection point. Measured tracer concentration in monitoring wells and mass balance calculations enable evaluation of CO2 mineralization. The mineralization has also been quantified using different isotopes.

News about the Silverstone Project 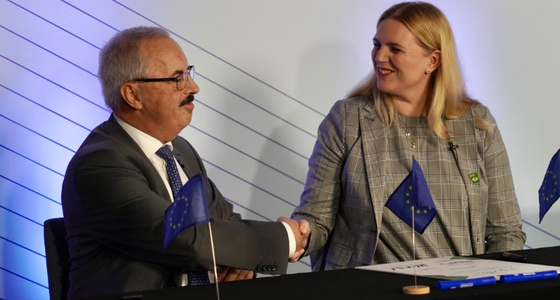 The Silverstone project is made by ON Power and Carbfix.